A trio of drivers from DHL Supply Chain, Maritime Transport and Gist have secured the distance categories in the Microlise Driver of The Year Awards 2021.

With nomination-based awards receiving more entries than ever before and telematics-based categories containing an initial eligible pool of over 252,000 drivers, the 2021 winners have triumphed after a rigorous data analysis process, corroboration by employers and assessment by an independent judging panel.

Anthony Bell from DHL Supply Chain won the Short Distance category, featuring drivers who regularly undertake journeys totalling up to 30,000 miles per year.  The judges were impressed with Tony’s level of technical ability and the way he applies himself wholeheartedly to his job. His manager explained that although he is a shy and unassuming individual, he is a very prominent and supportive member of the team who is constantly looking for ways to better himself. Tony has embraced each and every performance challenge and target set and has been quietly proud to see his name rise to the top of DHL’s national driver league tables. According to his manager “When you have a colleague like Tony in the workplace you know that you have a very special person in your team. I feel that Tony truly deserves recognition for his continued efforts and outstanding performance.  “I have always had a safety-first mentality, which has been further supported by the company improving my driving standards through the use of Smiths and the Microlise app. These have greatly improved my all-round safety and efficiency over the years, even when driving my own car,” said a delighted Anthony.

Another worthy winner, Zygmunt (Ziggy) Lurzynski from Maritime Transport, has scooped the Medium Distance category.   Ziggy’s manager provided a heartfelt reference explaining how this winner is an inspiration to his peers as well as being an unquestionably talented driver and a determined and resilient individual.

After moving to the UK from Poland, Ziggy learned to write and speak English to an excellent standard and undertook a hazardous cargo exam in what was at the time, a completely foreign language. As a driver for Maritime in Manchester, Ziggy has established himself as their top driver for the past two years’ running. A true ambassador for Maritime who leads by example, he is described as a ‘shining light within the business,’ Ziggy’s bosses ‘would clone him if they could.’

Stuart Moore has been driving for Gist for 25 years. Typically taking on routes that others are less keen to do, the winner of our Long Distance category puts his driving skills to the test on a daily basis as he collects consignments from fresh food suppliers, farms and factories and manoeuvres around the farm tracks and narrow roads that dot the Suffolk countryside.  His excellent attitude and driving skills have made him an obvious choice for Gist, when they look for a reliable and skilled driver to test new technologies.

When the Microlise solution was introduced to Gist in 2016, Stuart was surprised and disappointed to see his name half-way down the performance list: “When I looked at the data in more detail, I could see that I was getting a low score at one particular slip road and roundabout. I used this information to fine-tune my driving – and after 6 months I nailed it.  I had to change my driving style – now I even drive my own car differently as a result! I worked hard to get to the top of the leader board and what I do now feels like my normal way of driving.”

Chief Executive of Microlise, Nadeem Raza, celebrated the calibre of this year’s winning drivers, “The Microlise Driver of the Year Awards, which is now in its seventh year, continues to highlight the expertise and sheer dedication of drivers who travel the length and breadth of the UK, and further afield. According to the judging panel, there is very little to separate our shortlisted drivers, who are true ambassadors for the industry.” 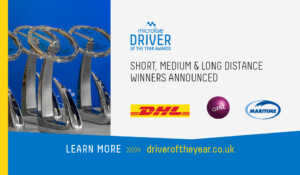