Drivers from DHL Supply Chain, Waitrose and Travis Perkins have been recognised as true heroes in the Microlise Driver of The Year Awards 2021.

With nomination-based awards receiving more entries than ever before and telematics-based categories containing an initial eligible pool of over 252,000 drivers, 2021 winners have triumphed after a rigorous data analysis process, corroboration by employers and assessment by an independent judging panel.

The Microlise Driver of the Year Driver Hero Award recognises drivers who have gone above and beyond to respond safely, professionally and with great community spirit when faced with potential human tragedy on our roads.

Lee Clempson and Daryl Braddock from DHL Supply Chain stepped up as true knights in shining armour while they were making deliveries around the Redruth area of Cornwall. The duo had completed several drops and were on their way to the next one with Daryl making the pre-call. As Lee drove over a bridge on the A30 he spotted a young lady standing on the wrong side of the barrier getting ready to jump onto the A30. He immediately pulled the vehicle over safely and jumped out giving the keys to Daryl to lock the vehicle.

Lee ran back and held onto the young lady and refused to let her go. She was confused and hysterical at this point and kept saying “just let me jump”. Lee held onto her until Daryl and another passer-by managed to drag her back over the barrier onto the pavement. Daryl phoned the emergency services whilst Lee talked to her to try to calm her whilst still not letting her go. He held her until the police and an ambulance arrived and took over. Lee and Daryl then continued with their route as if nothing had happened. When his manager spoke to Lee and Daryl about the event Lee said that he hoped he had not only saved a life that day but also the trauma that the driver and everyone else involved would have gone through if the young lady had carried through on her intended action.

Ryan Roser’s story is another inspiring one. A young and extremely capable driver from Waitrose, Ryan took swift and selfless action, saving the life of a woman and doubtless other road users. While driving on the M26 Ryan noticed a woman lying motionless with her legs and feet in the middle of the driving lane directly underneath a bridge. As other heavy goods vehicles and cars thundered past, Ryan jumped out of his vehicle squeezing between his lorry on the hard shoulder and traffic in lane 1. Running as he faced the oncoming traffic, Ryan frantically motioned at vehicles to move over. He then pulled the woman to the safety of the hard shoulder, checked her pulse and phoned for an ambulance. During the call, he provided location and medical information while covering the injured woman with his jumper to make her as comfortable as possible. Police subsequently closed the motorway and paramedics arrived on the scene. The woman sustained serious injuries but made a full recovery.

Paul Moorhouse, who works in the tool hire division, making customer deliveries for Travis Perkins, displayed the kind of cool headedness and quick thinking we all need in a time of crisis.

Responding to what could have been an immense human tragedy, Paul was packing up his rig on a suburban street when he reacted with split-second timing and went to the immediate aid of a mother who ran out of her home, crying desperately for help, with her baby in her arms. Her baby was blue and rigid and looked like he hadn’t been breathing for some time. Paul handled the situation calmly, dislodging whatever was blocking the child’s airwaves and the baby’s breathing resumed and it began to revive.

Paul maintains he has been the wrong person in the wrong place for most of his life but thinks that on this occasion, he was meant to be where he was on the day. According to his managers, Paul played the event down when he returned to base and it was only when camera footage was taken from the vehicle that the full significance of what Paul had done became clear. You can see Paul’s heroic, life-saving intervention in the attached video.

According to Chief Executive of Microlise Nadeem Raza, the judges found it impossible to separate these inspiring drivers and teams. “The Microlise Driver of the Year Awards highlight drivers who act with great courage and presence of mind when faced with challenges on the road. Our winners have clearly shown how lives can be saved through sheer bravery as well as through quick-thinking, empathy and training.” 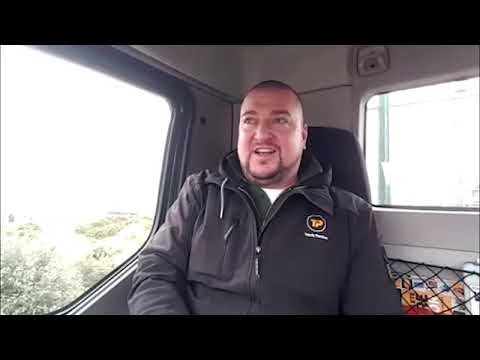